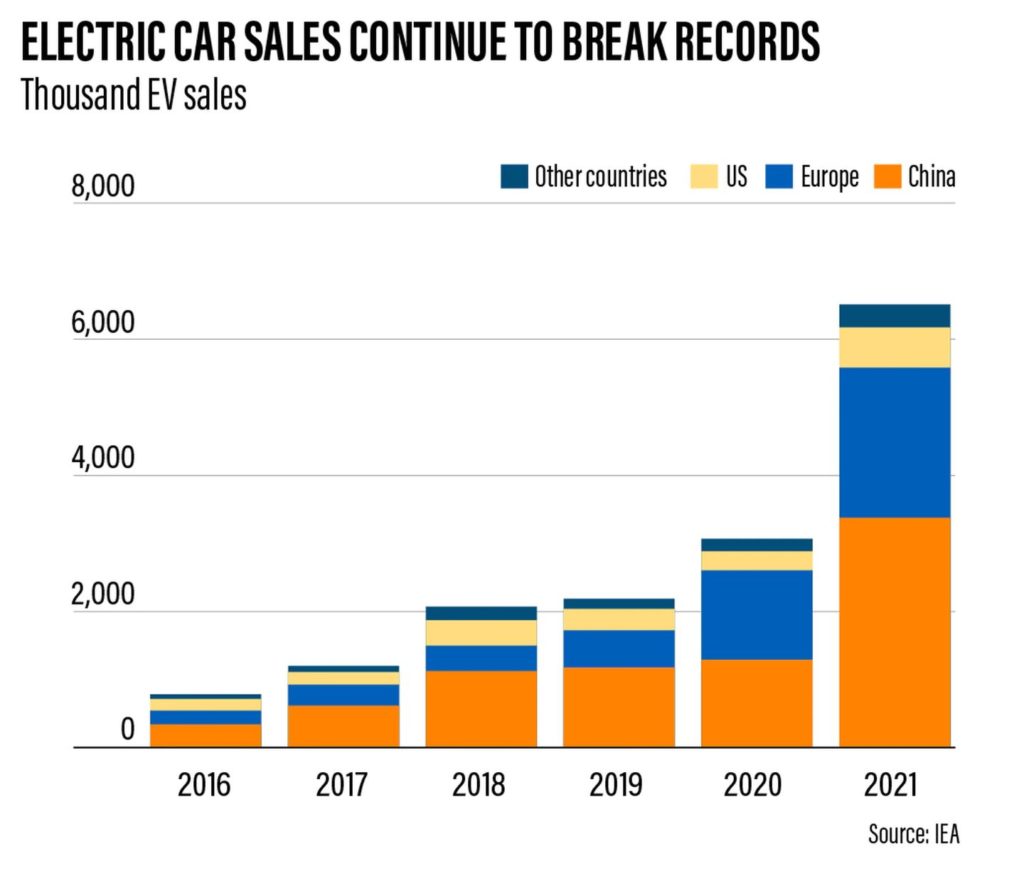 According to a publication by the International Energy Agency IEA, the increase in electric car sales has continued unabated. This is thanks to the “continued policy support” of governments, who want to reduce emissions in order to achieve the climate goals.

Governments around the world are committed to electrification and clean energy projects to reduce emissions. The US, Canada, the EU and the UK plan to become carbon neutral by 2050. China aims to reach this target by 2060. Many countries encourage the use of electric vehicles to reduce emissions from the transport sector.

“Continued policy support has been one of the main reasons for strong electric car sales in many markets, with total government spending on subsidies and stimulus doubling to nearly $30 billion by 2021,” the agency said. The IEA continues: “A growing number of countries have ambitious targets for vehicle electrification in the coming decades, and many automakers have plans to electrify their fleets beyond policy targets. In 2021, there were five times more electric car models available worldwide than in 2015, and the number of available models reached 450 by the end of 2021.”

We see similar trends in the first quarter of this year. Sales in China have more than doubled compared to the first quarter of 2021. Electric cars in China tend to be smaller and cheaper. There, an electric car is usually only about 10% more expensive than a conventional one. That has given the sales figures there a big boost. In Europe and the US, sales increased by 60 percent and 25 percent respectively during that period.

Fatih Birol, Executive Director of the IEA said: “The industry’s success in setting new sales records is extremely encouraging, but there is no room for complacency. Policymakers, industry executives and investors must be highly vigilant and resourceful to mitigate the risks of supply disruptions and ensure a sustainable supply of critical minerals.”

In other regions will also increase the sales of EV’s

An increase in the number of EV’s is also expected in the Middle East. In the United Arab Emirates (UAE) and Saudi Arabia in particular, governments are expected to deliver on their promises to become carbon neutral by the middle of the century. Leonardo Paoli, Energy Analyst for Clean Energy Technologies at the IEA: “The zero greenhouse gas emissions pledges in countries like the UAE and Saudi Arabia are likely to positively impact the use of EVs.”
The UAE aims to achieve net zero emissions by 2050. It plans to invest $160 billion over the next three decades to accelerate clean energy development. Saudi Arabia, the largest economy in the Arab world, aims to reach the target by 2060. Paoli: “There are also some specific targets, for example in Saudi Arabia there is a target of 30 percent of cars being electric by 2030 and in the UAE there is a target of 42,000 electric vehicles by the end of the next decade ”.

There are also several factors that have a negative influence on the increase. The rising prices of raw materials for battery cell production, for example, as well as supply chain disruptions caused by the conflict between Russia and Ukraine. The ongoing Covid-19 lockdowns in China could also slowdown the growth in EV sales in the near future.